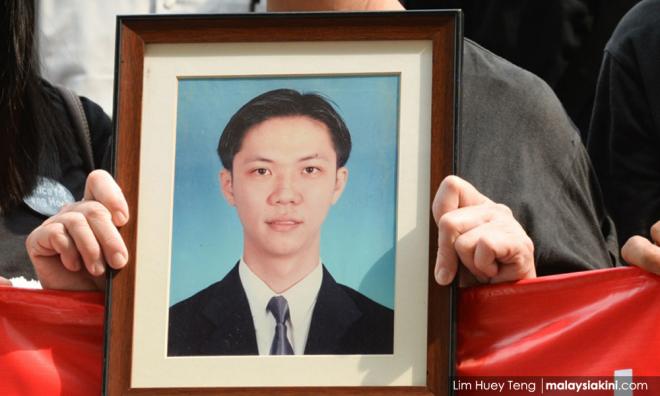 Police will be calling up officers from the Malaysian Anti-Corruption Commission (MACC) as part of its new probe into the death of Teoh Beng Hock, according to Selangor police chief Noor Azam Jamaludin.

"The investigation papers will be referred to the Attorney-General's Chambers for further instructions," Noor Azam (photo) said in a statement today.

He said others on the list to be called up as witnesses include think-tank Ideas former chief operating officer Tricia Yeoh, who wrote a column on the need for authorities to seek fresh leads, a decade after Teoh's death.

On July 16, 2009, Teoh was found dead after falling from the ninth floor of Plaza Masalam, MACC's former Selangor headquarters in Shah Alam, where he had been held overnight for questioning.

Noor Azam said Attorney-General Tommy Thomas had on July 16 instructed for Teoh's case of sudden death to be re-investigated under Section 342 of the Penal Code for wrongful confinement.

Thomas had at the time explained to Teoh's family lawyer Ramkarpal Singh that the new classification was merely an administrative procedure which will not stop investigators from gathering more evidence, including on possible culpable homicide charges.

Noor Azam said the new probe was also based on a Court of Appeal judgment in 2014 that one or more unknown persons, including MACC officers, had caused Teoh's death.

The judgment overturned the coroner's open verdict with regard to Teoh's death, ruling instead that Teoh died from a fall that could have been accelerated by unlawful actions of persons unknown, including by MACC officers.

Following the verdict, MACC agreed to pay RM600,000 to Teoh's family to settle a negligence suit they brought against the commission.

The court also ordered the police to investigate the death.

In 2016, the Attorney-General's Chambers had found no criminal element in Teoh's death.

Advertisement
01
Cheers and dance at ceramah attended by Najib, Bung Moktar
19 Sep 2020
02
Behind the scenes of breakdown that exacerbated friendly-fire in PN
19 Sep 2020
03
MP SPEAKS | Muhyiddin knows his days as PM may be numbered
19 Sep 2020
04
YOURSAY | Sabah will decide whether Bung’s Umno has changed
18 Sep 2020