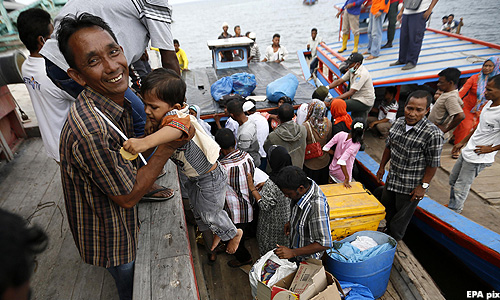 YOURSAY | Is it race first or religion first?

YOURSAY | ‘This time around, the refugees are fellow Muslims, and it makes very little or no difference.’

Proarte: Now that the movement control order (MCO) is partially lifted, Malay politicians will be back to their old tricks of racism, lies and bigotry.

Rais, of Indonesian extraction himself, should know that the peninsula was predominantly Orang Asli until the immigrant Muslims comprising Indonesians, Pakistanis, Indians, Arabs and Thais started to land on the peninsula and were conveniently categorised by the British as 'Malays' for political divide-and-rule reasons.

These 'Malays' arrived on our shores in similar fashion to the Rohingyas and their numbers started to outnumber the Orang Asli tribes. They were enslaved by these immigrants and gradually found themselves pushed to the interior through land grabs which the immigrants are doing to this day.

What Rais is saying about the Rohingyas actually can be applied to himself. He is arrogant, racist and made a whole host of criminal utterances which are seditious and incite Malays to racial hatred, but being a Malay elite, he appears 'untouchable '.

Vijay47: Rais, I suppose we can always rely on you when idiocy from your colleagues in Bersatu, PAS and Umno is temporarily lacking.

Let us examine some of the more salient points in your traditional blame-setting on other “races”.

You warn the Malays to be cautious lest the other races maul you. In the centuries the Indians and Chinese have been here, we have never intruded into Malay life - we only ask for our rights in culture, language and religion, obviously our entitlement as citizens. So when did we ever maul you?

The mauling aspect of Malaysian life was executed by the Malays themselves under the guise of race, religion and ruler. Rais, are you suggesting that the mauling and rape of Tabung Haji, 1MDB, Felda, or Mara was the work of “other races”?

It is telling that you refer to “other races” in the same breath as referring to Rohingyas. Where does your leader, Mahathir, fit in? Is he Malay, Indian, or perhaps Rohingya?

Remember, unlike citizenship, race is not a status accorded by a piece of paper, it is a biological fact.

Where are the Indonesians to be slotted - as Malays or “other races”? Whatever any similarity in ethnicity, they are recent immigrants who came here seeking their fortune through skill and hard work, especially in Chow Kit.

Some made it big. Some with feminine lure and despite being maids here, earned enough to build palaces back home.

Apa Ini: These politicians were happy to ignore the pain and suffering of the refugees - some officials have, for gain, joined in their obvious exploitation – who do the work citizens reject as too dirty, too difficult, definitely too underpaid.

The same citizens join in the condemnation now because suddenly the refugees are all crooks and drug traffickers and troublemakers. The racial prejudice is palpable and the danger is that they live in crowded conditions and will 'spike' the Covid-19 curve.

When this happens, as surely it will as it has in Singapore, Malaysians join in openly to "shoo(t) them on sight". This quote is for those of you old enough to recall our Malaysian policy with the Vietnamese boat people, a quote supposedly credited to Mahathir himself.

The fact that this time around, the refugees are fellow Muslims makes very little or no difference. Is it a case of race before religion?

Evin K: Equating the circumstances that the Rohingyas are in today to the Indian and Chinese labourers pre-independence is not only off-tangent but exposes Rais of his extreme racism and xenophobia.

Rais clearly needs to be educated on current events and history - the Rohingyas are refugees who have fled their homeland for fear of persecution and hostility.

The Indians and Chinese of pre-independence, on the other hand, were not refugees but were brought into Malaya by the British colonisers in the 18th century as labourers, just like how Malaysia is bringing in migrant workers today by the millions to work here.

Also, why are the minority citizens of this country being accused of mauling the majority? When did this ever happen?

Constitutional Supremacy: Rais, what does the constitution say? After independence, all Malaysian citizens enjoy equality regardless of race, colour or creed with some exceptions like Article 153 which allows for reservation of places in universities, government service and licences for Malays and other natives.

Your arguments are devoid of any merit and are repugnant to the constitution. At one time, Thailand had sovereignty over northern states and can now Thailand claim them? Of course, it cannot. Rais, your comments are ill-conceived.

Specialist Batsman: Rais, you are obviously a sad by-product of decades of social engineering by the Umno/BN propaganda.

In your myopic and shallow mind, Malays are the true owners of this land and are entitled to whatever the resources this country has.

You also believe that the special positions of Malays and their entitlement have been challenged and threatened by non-Malays, despite the fact that these non-Malays are a mere fiction manufactured by the Umno/BN narrative.

Therefore, according to the Umno/BN propaganda, Malays must come together and unite under Umno/BN while turning a blind eye to decades of abuse of power and indiscriminate plundering of nation's wealth by the Malay ruling elite from Umno/BN.

Anonymous 28327464629548: In 100 years, the few Chinese and Indians in Malaysia will still be called ‘pendatang’ (immigrants) by racialist politicians.

While possibly the descendants of the Rohingya among us today will be considered bumiputera, and perhaps some joining in the age-old tradition of calling non-Muslims ‘pendatang’.