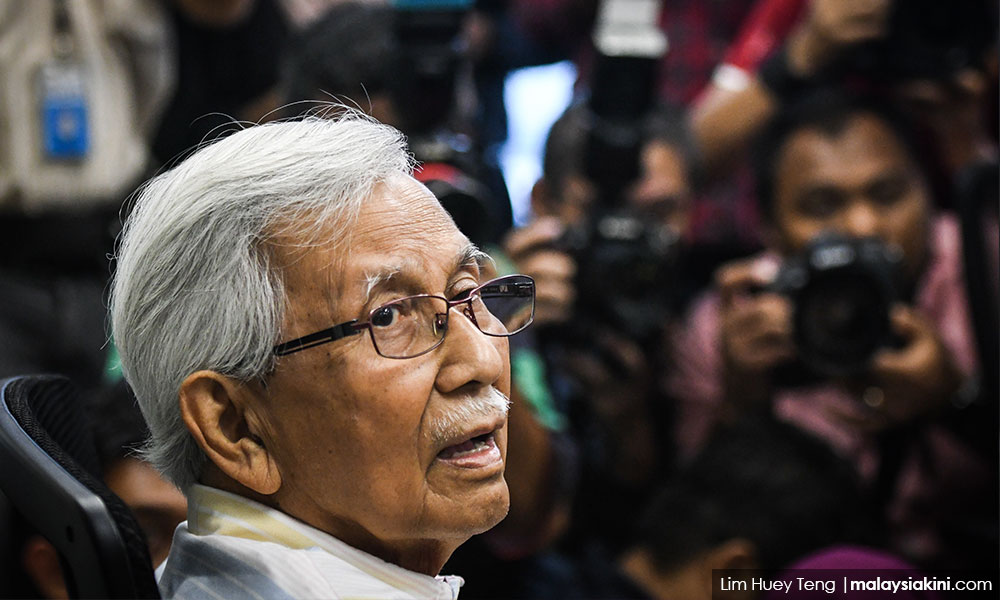 YOURSAY | 'Mahathir is no saint in this whole fiasco of the collapse of Harapan.'

Kural: Former finance minister Daim Zainuddin’s reasoning on matters he refers to do make much sense. However, the fact remains that in Malay-dominated politics in recent times, the web of morality weave of some leaders have been largely determined not for responsible service to the nation.

There has evolved a self-serving value system based on what’s in it for me primarily. Any references to one’s community seem to have become a successful Pavlovian ploy to garner support, as such, without genuine concern for the welfare of the communities at large.

And former prime minister Dr Mahathir Mahathir’s leadership plight of very recent times is much of his making, as it is of his so-called loyal lieutenants.

To have subverted the legitimacy of a duly-elected government, instead of taking recourse to one small group’s grievance via responsible means of dissent by the dissolution of Parliament and a call for fresh elections, the breakaway Bersatu faction has, in the minds of some ordinary men in the street, acted very irrationally.

Considering the present strained circumstances in our young democracy, one is left wondering what the term “treasonable” signifies.

Quigonbond: Nice try, Daim. But I don't buy it at all. This is a political apex predator we are talking about.

Mahathir knows there are things that could be done while in power. He didn't need to resign as prime minister until Perikatan Nasional (PN) forces a vote of no confidence. During which time, Pakatan Harapan could have persuaded a few to jump back to the then ruling coalition.

The only reason Mahathir resigned is because he didn't want PKR leader Anwar Ibrahim to become PM, and Harapan to survive. He also took a bet that there's no visible leader from PN who can claim the mantle.

So, he has to remain the "only" saviour with his presidential-style approach. It was a serious miscalculation. Not only PN rejected the idea, but Harapan also rejected that idea.

So let's get past this justification. Tell us what Mahathir's plan is for the future. Does he want to become PM again or will he and his Bersatu remnants support Anwar this time?

If he declares so, it would represent the real tectonic shift in Malaysian politics, give confidence to Malaysians and investors that there's a real chance of Harapan wrestling back power soon and stabilising the nation.

Anonymouss: Yes, Mahathir is no saint in this whole fiasco of the collapse of Harapan. In fact, I would think he was a key figure, together with former PKR deputy leader Azmin Ali, to pull Bersatu out from Harapan.

He may not have agreed to the pullout at the last moment before the collapse of Harapan, but certainly he had been in discussions with his Bersatu leaders for months to consider the move. Surely, the plan could not have conceptualised during the few days before the Sheraton Move.

This begs the question as to why Mahathir even harboured the thought of pulling out from the coalition when he claims in media reports that he would not betray his friends from Harapan.

Now that he has bungled his own plot, he is trying to make amends with Harapan in order to regain his premiership. Coalescing with him will only lead to further disappointment.

Time and again, he repeated unequivocally that he would hand over the premiership to Anwar as promised and yet said a promise is a promise when asked about his intention on the PM transition.

But he finally let the cat out of the bag after the fall of Harapan when he said Anwar cannot be the PM. If this is the case, he should be honest about it from the start, instead of taking Harapan leaders for a ride, including DAP veteran Lim Kit Siang who wagered his political career on working with him.

This is Mahathir - work with him at your own perils!

Just A Malaysian: Mahathir never believes in a liberal multiracial Malaysia as espoused by Harapan. He harbours a return to the Umno days of Malay political dominance and schemes his way to achieve this goal.

This dichotomy caused Harapan to collapse. His resignation was a step for him to exit Harapan and all its earlier promises and to build a new coalition unencumbered by Harapan’s manifesto, Anwar and DAP.

But it backfired and his closest ally hijacked the PMship. It was never due to the shortage of time; it was a well-strategised plan gone wrong.

Daim attempts to explain Mahathir's decision. The truth is that it is not what Mahathir did when he resigned. It is what he did and said at the Malay Dignity Conference and the plotting that took place between him, Azmin and Muhyiddin Yassin that ultimately led to Bersatu leaving Harapan.

What happens now? All Harapan parties should come together to see whether they can agree on a way forward. Mahathir and his people should decide once and for all where they want to be. They cannot be on all sides at the same time.

No one can dispute the fact that Malays are the majority race in Malaysia. No one can, or will, dispute the need for there to be an equitable distribution of the wealth and the opportunities the nation has.

And no one should dispute the equality provisions of the Constitution either, and the right of non-Malays to be treated justly and fairly.

I am more interested in good governance, transparency, anti-corruption, freedom of the press, independence of professional institutions, minimum political appointees to institutions and government-linked companies (GLCs), and affirmative policies balanced by merit.

Malaysian Bulldog: Perhaps the question is not who are representing the non-Malays because those who were supposedly there to do that abused their positions and made money for themselves instead of the community they were supposed to serve.

If MIC, for example, served the Indian community appropriately, we wouldn't see so many Indians still uneducated and struggling to make a decent living.

What we need are people of good character who really want to make the whole country better off, a better place for all Malaysians. For this to happen, we can't have politicians who just want power and to enrich themselves and using race and religion as their political weapon.

For this, you have to ask why was there an understanding for a transition of power. Simple, the majority didn’t want Mahathir.

Mahathir wanted a Malay-Muslim government and to be the PM of PN, a government by Malays for the Malays. All this while, Mahathir hated a multiracial Harapan government, especially when he has to share power with DAP.

Muhyiddin's betrayal is Mahathir's retribution for being a traitor to those who voted for Harapan.